My Biggest issue with New Belgium is they don’t distribute to New Jersey.  In order to get New Belgium beer (and others), I trade yeast samples with a beer buddy in California.  In my last trade I got a New Belgium Mothership Wit along with some other beers that I’ll be reviewing later. 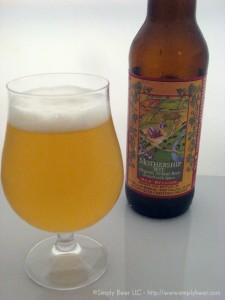 Poured a billowy white head that sits nicely on top of a hazy straw colored brew. The head dissipated pretty quickly to a thin white collar.

A nice mix of orange, coriander, and a bit of clove with underlying banana.  It has a very appealing aroma, while definitely a wit had some aroma characteristics of a hefe-weizen.  I guess the best way to describe it would be a fruit salad of sorts.

I was looking for a heavier mouthfeel with this beer, but it really was a nice balance of flavors that matched a thinner mouthfeel.  A very refreshing summer beer, the coriander and orange were held in check allowing the wheat malt character to have a place in the beer and finished nicely with a spice bitter orange flavor.  The taste did not disappoint!

This is a beer you drink on a hot day to refresh yourself.  A session beer at 4.5% abv, I could drink this all day (if they sold this in Jersey!!!!) Well balanced a great example of a wit.

This would be nice with a spicy shrimp salad or classic hummus.   You’d want to play off the zesty orange in this beer.