I think Great Divide has been putting out some good beer, I recently reviewed the Hades, the Yeti, Hercules, and their Fresh Hop Pale Ale.  There is a lot of lineage for the Belgica Belgian IPA to live up to. 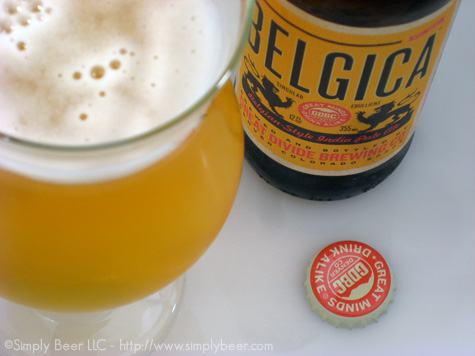 Light straw to golden color beer, poured with a moderate head that quickly dissipated to a thin collar of beer.  With a fairly small head there was a fair amount of lacing going on with this beer.  Also, a small column of co2 rising up the middle of the glass, helping to retain what little head was left.

Interesting aroma, it is very subdued, but very pleasant. It was mostly bready, but under that were notes of wild flower, tangerine, honey, and some spice.

The taste is just as interesting as the aroma, there is a very dominate hop presence in this beer.  After the aroma I thought it was going to be more of base English IPA.  But the flavor has me leaning the other way towards an American IPA.  The hops hit you right off the bat, big fruity, citrus flavors with a generous amount of sweetness.  Those flavors transitioned into a grassy flavor with a refreshing touch of tartness, followed by the big booming hop bitterness.  In this beer the bitterness really accompanies the upfront sweetness, but doesn’t stick around in your mouth and build sip after sip.

There is something about this beer that is really appealing to me, I think it is the touch of tartness.  I found this beer to be wonderfully unique in its flavor profile.  I wish I had another one to drink.  Definitely worth a purchase.