Wow, that is quite the name! I’m a huge fan of the smoky goodness that comes with good rauchbiers.  They always remind me of bbq, there’s nothing like the taste of smoked meat!  The Dog Schwarz Smoked Double Lager is a limited release in Flying Dog’s Wild Dog series.  After much fanfare with the 2008 release they created another limited run in 2009, which I will be uncorking in just a few minutes. The Dog Schwarz is a combination of a schwarzbier (a German black lager) and a rauchbier (a German smoked beer); lets see how these to styles married up to one another. 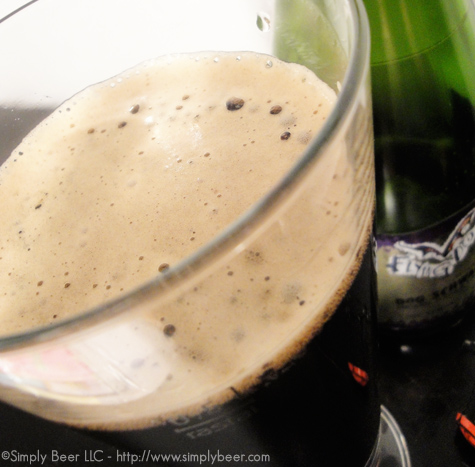 Here is how Flying Dog describes this beer:

Meet the newest member of the critically acclaimed Wild Dog family, Dog Schwarz (sh-var-ts) Smoked Double Lager. Originally released in September 2008 (to coincide with our FBAG GABF party), we got such good feedback from consumers that we’re still making it in small batches today. Dog Schwarz is smoky, but not too over-the-top – like all our beers, we strive to make something that is well balanced.

We love pairing the Dog Schwarz with pepper cheeses, smoked meats and barbecue.

A jet-black beer, as you’d expect from a schwarzbier, slight mahogany highlights around the edge of the glass.  Not much in the way of head, but I wasn’t expecting whole lot there either.  It did pour a slight espresso color, which quickly faded to a collar on the glass.  My only complaint, visually, about this beer is the level of carbonation, should have been a bit more, but that might have been a cork problem.

With out a doubt a rauchbier, dominate smoky aroma through and through.  It is slightly peaty and doesn’t allow other aromas to come through.

With a rauchbier it should be smoky but not so that you feel like you are licking a fireplace.  With the schwarzbier it should actually be a fairly light dark beer with decent hop bitterness to it.   This beer, in my opinion hit the mark on the smoked malts.  A very hard flavor to do well, it is a major player in the flavor but is not so overwhelming you can’t taste anything else.   There is another layer to this beer that makes it very enjoyable; a touch of malt sweetness almost chocolate as well as some dark fruit that awaits you under the smoke.  The thinner mouth feel seemed to keep the smokiness from getting out of control along with the light carbonation.

Absolutely blown away by this beer.  The right amount of smoke and sweet malt, I was able to drink the whole 750ml bottle myself.  I don’t think I’ve ever said anything like that about a smoked beer before.  I highly recommend trying this beer, it is a hybrid of styles; since when has that stopped anyone!