It’s not every day I get to leave my cave and get out.  Even rarer are the days that I have to travel to lands unknown.   This past weekend brought me to Rochester NY.  For those of you who are unfamiliar with western New York, like me, Rochester is a small city that sits about 75 miles east of Buffalo on Lake Ontario or a 6 hour car ride for my lead foot.   After some carefully research (“google:beer bar rochester”), the first listing was the Tap and Mallet.  I checked out their website which listed some pretty good drafts, including ones I hadn’t had before, so I decided this would be “my bar” for my one night in Rochester. 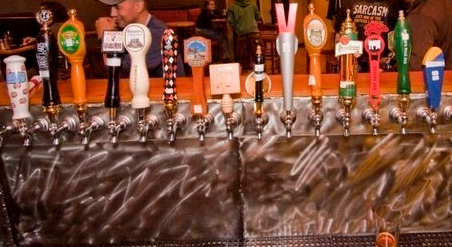 I very much liked what I saw when I walked into the bar.  It was clean, looked nice, lots of taps handles raising up from behind the bar, and a cask sitting on top of the bar.   I started the night off in the dinning room with my extended family, some food, and a couple of beers.  The food was good, although I didn’t dare try the deep fried pickles; I was not feel very adventurous with my dinner.  The beer on the other hand was quite extensive, 30 taps, a cask, and a good list of bottles to choose from.

I started off with a pint from the cask that was sitting on the bar, the Brooklyn Bitter, otherwise known as the 55 pennant ale.  I was a bit disappointed in the carbonation on this, it was flat, but the beer tasted pretty good. It was sweet and smooth, buttery with a touch of bitterness on the finish.

Keeping it light and low abv since I knew I was going to be here for a while, I went with the Six Point Sweet Action Blond ale.  This was actually on of my favorites of the night.  A simple beer, a grainy / honey sweet aroma with a touch of earthy hops.  The grain carried through from the aroma to a full, creamy, big hoppy beer.

Another new beer for me was the North Coast ACME California IPA.  Being a Road Runner fan and always feeling bad for for Wylie E Coyote, I try to stay away from things with ACME in the  name, it never worked out for the coyote.  I was starting to feel that way about his IPA, until it started to warm up.  Initially it was a big bitter bomb, but as it warmed up the Orange Citrus aroma came out as well as a bit more malt balanced out the bitterness better.

My last beer with dinner was the Landmark Vanilla Bean Brown Ale.  This was definitely a vanilla beer, strong vanilla presence in the aroma and the flavor.  The vanilla, the mild smokiness, and the nutty malty profile of this beer was not working for me.  I think this brown ale, without the vanilla, would have been more appealing to my palette. 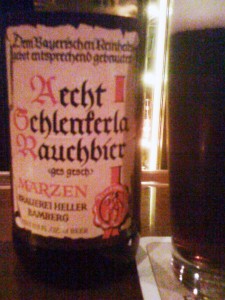 Around 10pm My family left me to do damage at the bar, I took up residence in the corner of the bar with a nice view of the taps and cooler.  Most of the beers on draft were quality beers, but I had many of them previously and like to try new beer while I’m out.  For my next beer, going to another extreme,  Schlenkerla Rauchbier Marzen from a 16oz bottle.  This beer was a bit more smoky then I was expecting based on the Schlenkrla Urbock.  It’s flavor was very BBQ’ish with a good deal of malt.  But, Overall I enjoyed the Flying Dog Dog Schwarz Double Smoked Lager and the Schlenkerla Rauchbier Urbock more.

After an intense smoked beer, I needed a palette cleanser, something clean, smooth, and would coat my mouth.  I choose a draft of Wagner Valley Caywood Station Oatmeal Stout.  I’m not going to say anything about this beer except that it met the reasons why I selected it.  But after a full smoke beer, my palette was shot for a bit.  I did think this was served a bit cold, but was very nice to drink as it warmed up.

It was getting a bit late in the evening by this next beer and my notes pecked into my iPhone are becoming less coherent.  None-the-less I was not ready to turn in the towel and was ready for another extreme beer, or at least I was hoping it would be.  I ordered a Ichtegem Grand Cru, a flemish red.  As soon as I saw the bottle I was disappointed.  It was a beer that I had sampled after the Esoteric Italian Beer Brawl.  While it isn’t a bad beer, it is about a 3 on the sour meter, more sweet then sour, not very tart.  But, if you’ve never had a flemish red, it is a good one to start with. 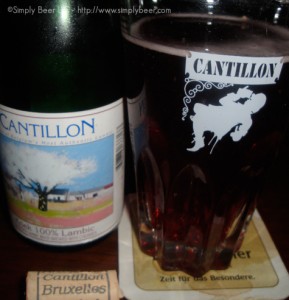 Since the Ichtegem wasn’t as sour as I thought it would be, I decided to have a beer that I know I like and enjoy just in case there was still a bit of sour left on my palette.  It was A Belgian tripel you can’t go wrong with, the Victory Golden Monkey.  As with the oatmeal Stout I had after the smoke beer,  I recorded no notes, but you can listen to our review in Beer Brawl 13.

I finished off the night, before my cab ride back to the hotel, with probably the most expensive beer on Tap & Mallet’s menu. A sure fire winner and I was really in the mood for it, the Cantillon Kriek.  This is a teeth licking super tart 100% pure Lambic.  It has a supreme cherry tartness that I can only describe as puckerlious!  At 1am, after 8 other beers I really didn’t take any notes, just sat back and enjoyed this treat of a beer. 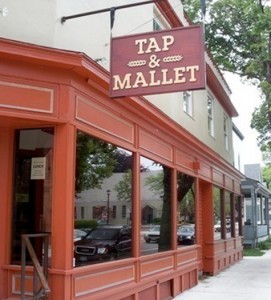 I had a great Night at the Tap and Mallet, the folks working there were knowledgeable and nice, especially the bartender Chris.  A very enjoyable evening.