Thanks to Jason at Barleypopmaker I’m sampling my fourth New Glarus beer in 3 weeks.  I’ve had the Stone Soup, Dancing Man Wheat, and a big Belgium Red.  The Belgian Red absolutely rocked; I never knew a fruit beer could taste so good.  The next stop on my New Glarus tour is the Fat Squirrel Hazelnut brown ale.  It’s a great name for a beer and has a nice little story behind it. 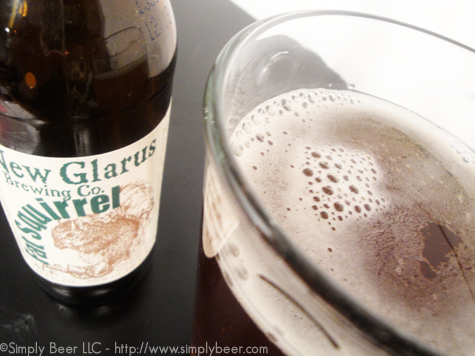 One deceptively spring like winter day, Brewmaster Dan walked home from the brewery, sat down to dinner and said, “Boy, there are some fat squirrels out there. They’re running all over the place. I think I should brew a Fat Squirrel Nut Brown Ale.” Deb agreed and so another beer legend was born.

A crystal clear copper beer with a slight orange hue.  But the head, well, that was almost non-existent, even off the pour.  There was a bit of a collar of foam that is fairly persistent.

A very subdued aroma.  Hints of malt, hazelnut, and a bit of chocolate.

Medium mouthfeel with a very big flavor.  Smooth malty nuttiness greets you with this beer.  The nuttiness transitions into a hint of Hazelnut, that was also present in the aroma, that quickly is engulfed by an earthy nuttiness bitterness. 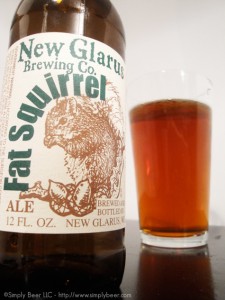 I enjoyed the flavors in this beer, even though I’m not a fan of hazelnut.   I was disappointed in the appearance of this beer.  For a malty brown ale, I expected a bit darker beer and a substantial head.