Another ancient beer that Dogfish head has resurrected in a series of extreme beer, such as Midas Touch and Sah’tea.  The Chateau Jiahu is based on the findings of a Molecular Archeologist in Northern China.  Dogfish Head first introduced this ancient representation in 2006 and have since been making it as a seasonal rarity. 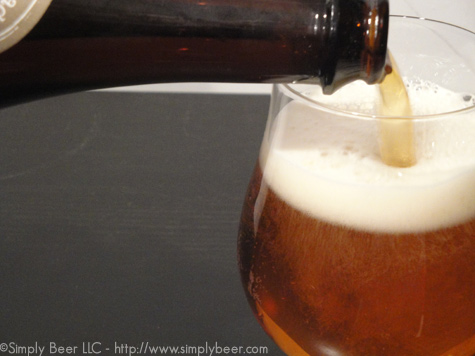 Here is the history from Dogfish Head:

Let’s travel back in time again (Midas Touch was our first foray and Theobroma our most recent), this time 9000 years! Preserved pottery jars found in the Neolithic villiage of Jiahu, in Henan province,Northern China, has revealed that a mixed fermented beverage of rice, honey and fruit was being produced that long ago – right around the same time that barley beer and grape wine were beinginning tobe made in the Middle East!

Fast forward to 2005…. Molecular Archeologist Dr. Patrick McGovern of the University of Pennsylvania Museum of Archaeology and Anthropology calls on Dogfish Head to re-create their second ancient beverage and Chateau Jiahu is born.

In keeping with historic evidence, Dogfish brewers used pre-gelatinized rice flakes, Wildflower honey, Muscat grapes, barley malt, hawthorn fruit, and Chrysanthemum flowers. The rice and barley malt were added together to make the mash for starch conversion and degredation. The resulting sweet wort was then run into the kettle. The honey, grapes, Hawthorn fruit, andChrysanthemum flowers were then added. The entire mixture was boiled for 45 minutes, then cooled. The resulting sweet liquid was pitched with a fresh culture of Sake yeast and allowed to ferment a month before the transfer into a chilled secondary tank. 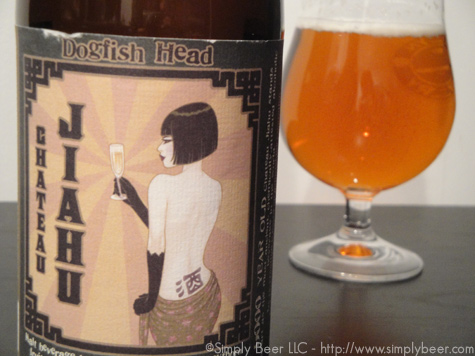 Beer pours almost an orange color, lots of little bubbles in this beer that don’t seem to quit.  Reminds me of champagne bubbles.  Head retention was nothing to write home about, but I wasn’t expecting much from this beer with all the unique ingredients.

Beer has a very pretty smell, if smells can be pretty.  Besides the honey and grapes, I was picking up some other aromas that I couldn’t place.  It does have hawthorn fruit and Chrysanthemum flowers in it as well.  But not knowing the types of aromas this fruit and flower make, I can only guess the other smell I was picking was from one of these or the yeast.

This beer has an interesting flavor; the alcohol and grape are very distinctive in this beer.  Sorry for this poor description, but it taste like a mix of a light bodied amber ale mixed with muscat desert wine.   This is a very sweet beer, slightly viscous, the slightly syrupy nature of the beer coats your mouth leaving a long lingering taste.

I wonder if there are any hops used in this beer?  I’m not getting much bitterness, although there is a pleasant dry, almost tart finish to the beer.

Calories: A Sweet 8% abv beer, tastes like a lot of residual sugar left in this beer which would put this on the high side of the 8% range, 250-275 calories per 12 oz (Calorie Chart)

I don’t know if I like this beer or not.  Probably not what you would expect from a huge Dogfish Head beer fan, but this didn’t leave me wanting to finish the bottle.  It is a very interesting beer to try, so if you haven’t had it go try it.  I would love to hear your thoughts.