I usually don’t do another review of the same style of beer from the same brewery so close to one another, but with all the comments left about the Avery DuganA, I had to review the Maharaja fairly quickly while I could still recall the DuganA.  The DuganA was Avery Brewing Companies double IPA, the Maharaja it its big brother, and Imperial IPA weighing in at a hefty 10.6% abv.  Lets see if it trumps its little brother, which I might add was pretty darn tasty. 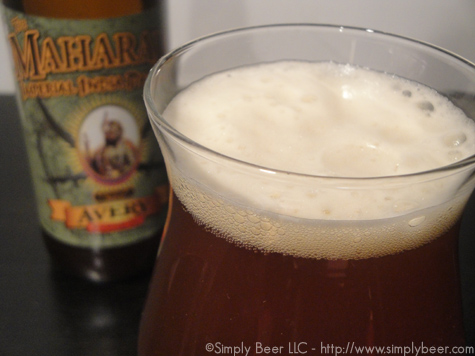 Maharaja is derived from the sanskrit words mahat, – “great” and rajan – “king”. Much like its namesake, this imperial IPA is regal, intense and mighty. With hops and malts as his servants, he rules both with a heavy hand. The Maharaja flaunts his authority over a deranged amount of hops: tangy, vibrant and pungent along with an insane amount of malted barley – fashioning a dark amber hue and exquisite malt essence. 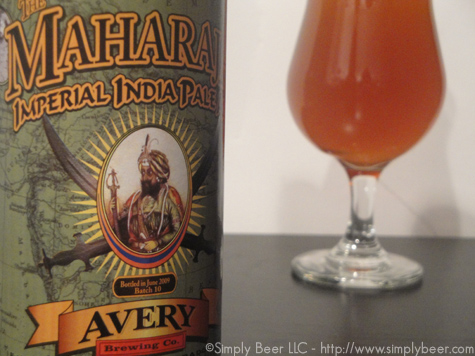 The Maharaja poured a hazy orangish brown color with some red highlights tucked in.  Fairly small head on this beer with just a tiny bit of lacing. I generally expect a big head on my IPA’s to unlock the potential of the aroma.  I’m not sure if my glass is dirty or the high alcohol has knocked down the head.  I’ll drink this first glass and determine the head on the second glass. (I love 22oz bottles).  The head on second glass was much better, mush have been my glass…

For all you hop heads, bottling disclosure.  This bottle was bottled in June of 2009 (batch 10).  So this beer is 7 months old.  On the nose, a pretty big caramel malt, lots of orange and mango along with a bit of pine.  Actually pretty decent for a 7 month old beer. 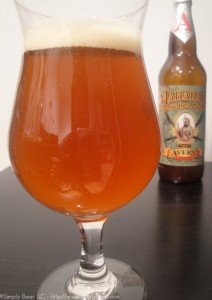 This beer actually tastes like it smells like it tastes, big sweet caramel malty, which lead into a citrus flavor of ripe pineapple and grapefruit.  The big citrus middle mouthfeel leads into a big long lasting bitterness.  The two big differences from the DuganA, the pineapple and some significant alcohol backbone.

A big IPA for sure, no holds bar.  Tons of malt, tons of hops, and lots of alcohol.  A good IPA that packs a big punch!