New Belgium beers are hard to come by in New Jersey, so when my I received these two beers in a trade, I knew I had to review them together.  The Ranger IPA is one of New Belgium’s latest non Lips of Faith beers.  I’ve heard some good things about this beer and it seemed to be in fairly high demand when it was first released at the beginning of 2010.  I’m not sure of the age on these beers since there were no legible bottled on dates, but they were sent to me with in the last month, so they should be fairly fresh.

Here is how New Belgium describes the Range IPA:

New Belgium’s foray into the true American India Pale Ales. Bring out the hops! This clear amber beauty bursts at the starting gate with an abundance of hops: Cascade (citrus), Chinook (floral/citrus), and Simcoe (fruity) lead off the beer, with Cascade added again for an intense dry hop flavor. Brewed with pale and dark caramel malts that harmonize the hop flavor from start to finish, Ranger is a sessionable splendor for all you hopinistas. Thank your Beer Ranger! 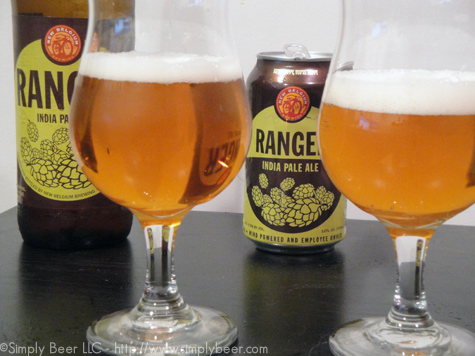 Crystal clear, lots of bubbles coming up from the bottom.  Poured with a bubbly head, like pancake batter with a touch of lacing on the glass.  A very nice looking beer.

Like the can, it pours a crystal clear, not as much in the way of bubbles coming up from the bottom as the can did.  But other than that the beers poured exactly the same as you would expect. 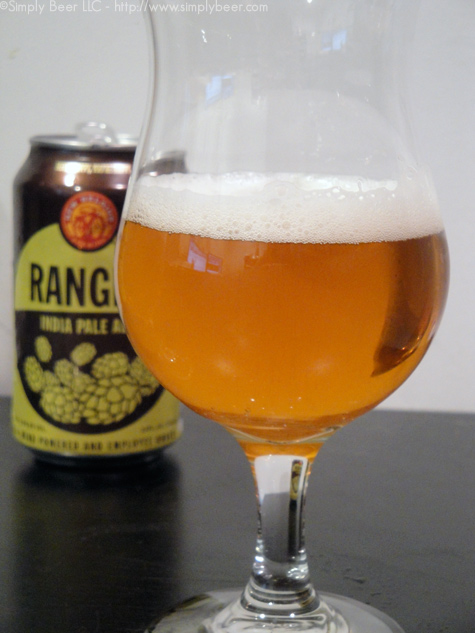 Very appealing nose of tropical fruit, pineapple and mango with bit of pine and bubble gum.  Under it all I get this very unique woody orange aroma.  It’s not an oaky aroma, but more earthy, and very pleasant.

Oddly enough it smells exactly the same as the can, although I got the woody/earthy orange right up front before the tropical fruit.  Maybe because I was now looking for it.  But I’d say they are the same. 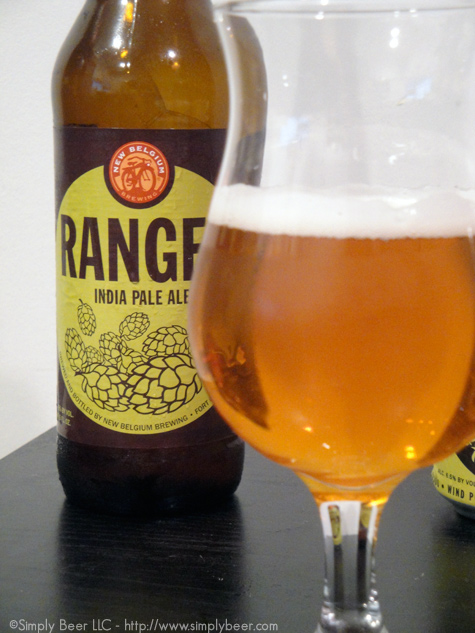 What I notice right up front is the very thin mouth feel, but it still tasted creamy, bitter and unfortunately very metallic. I don’t know what it is about cans, I have only had a few cans of beer that haven’t had this pervasive metallic flavor to them.  The second sip wasn’t as bad, but still that metallic flavor is getting in my way enjoying this beer.  The beer starts off thin, but quickly redeems itself with a nice creamy caramel middle before falling out and finally finishing with a flat earthy bitterness.

The bottle tastes remarkably different from the can, it still has thin initial mouth feel with the creamy and bitter taste but without the detracting metallic flavor.   I felt the bitterness was also more predominant then in the can from the middle through the finish.  I would call this your typical American IPA, not a lot on the malt end but tons of hops and bitterness.  The bitterness doesn’t seem to quit, several minutes after my last sip it is still quite strong on the palette.

There was this gritty metallic taste that I just couldn’t get past.  I thought the beer looked and smelled wonderful, but that flavor was a hang up for me.  I’m not sure if it is just a flavor that I’m acutely susceptible too or it is that predominant, but it was present in every sip of the beer even switching back and forth between the bottle.  I will say this, as the beer warms to room temp the metallic flavor does subsided quite a bit.

I think this is an average to above average American IPA, a bit lacking on the malt for my personal taste, but great aroma and appearance make up for that.  Huge hop presence in this beer totally destroys your palette, and the bitterness lingers for an exceptionally long time.

My only regret, I wish I could have had this on draft as well to compare the three together!