What do I want to be known for? 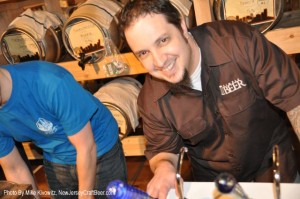 Here I am, over 2 and a half years into Simply Beer and this question has been on my mind a lot lately, “What do I want to be known for?”  For my long time readers you have seen a progression of the site as I’ve been trying to figure out what I want Simply Beer to be.  I had a realization a couple of minutes ago as I’m brewing this Saison. I need to start molding this site to what I want to be.  If I can do that and not get caught up in what everyone else is doing, then I will have answered this question.

When I started Simply Beer it was all about the Beer Reviews.  There is definitely a place on the internet for beer reviews, especially the more creative ones, but the more I did them the less I was enjoying the beer I was reviewing.  Furthermore, I’m not a gifted writer, not even an average one in my opinion which makes writing more of a challenge.  Plus, I really didn’t enjoying grading or giving scores.  So about a year and half ago I stopped scoring beers and just started giving formatted reviews.    Still I realized I really didn’t want to be know as a critic.  Why?  This goes back to my question, What do I want to be know for? I didn’t want to be a beer critic, beer review, or beer writer.

What do I want to be? I want to be a Brewer.  It is now the precipice of my career, do I stay the course or take the plunge?  I love making beer and sharing my beer with who ever wants to drink it, more so then drinking what ever commercial beer I have on hand. Also, I felt I couldn’t make that transition from Reviewer/Homebrewer to Homebrewer on course to a brewery career if I kept writing the reviews.

It was a quite a realization for me, probably easier for friends and family looking at me to see then for me to see myself.  While I’ll still write some beer opinions because sometimes a beer is inspiring to me and I’ll write about it, but you will see more and more homebrewing on Simply Beer and some new post as I transition my career over the next five years to a Professional Brewer.  That’s right, Time to take off the diapers and put on the big boy pants, I’m officially working towards a brewpub.

Right now I’m finalizing my application to the American Brewers Guild, taking the first steps to a formal brewery education.  Words cannot express how excited I am to have a clear direction in my professional career.  I’m taking the first steps in making my dreams a reality.  I’m ready for the hard work and dedication.