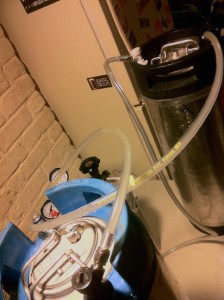 A couple months back I read an article in BYO Magazine (I think) about dry hopping beer using Corney kegs.  I thought, “Why would this be any better?”  After a quick read it was very clear my dryhopping techniques were in serious need of some reworking.  This post will be about what I’ve learned and how I’m now doing my dry hopping.  But first a couple of tips about dry hopping with a Corney before the how-to.

Why would you want to use this method?  There is a couple of reason why I like this method. First and for most, you dramatically reduce the surface contact of your beer to the air.  You’ll see why later.  Secondly, it makes transferring very simple and neat. Finally I get a much better hop profile using this method, especially with multiple dry hops.

Dry hopping in the keg is actually very easy provided you have the equipment.  Here is the equipment you’ll need for a 5 gal batch: 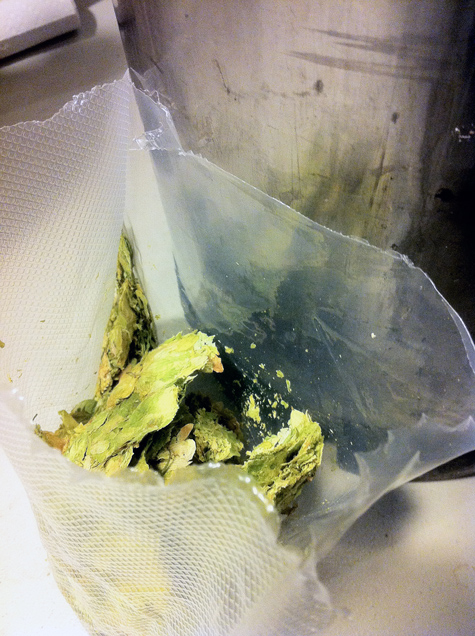 Add hops to sanitized mesh bag and add the bag to the Sanitized Corney.  Be sure hop bag is closed/tied up.  Transfer to a keg as you would normally when kegging your beer.  Once the keg has been filled, close up the Corney, there will not have much room left.  Once it is sealed, attach the gas line and push a couple pounds of pressure to purge out the oxygen.  This way you’ll have no oxygen sitting on top of the hops and beer.  Once you have the keg sealed up and purged, I usually give it a good shake to loosen up any of the hops that may be stuck together to get as much surface contact between the hops and beer. 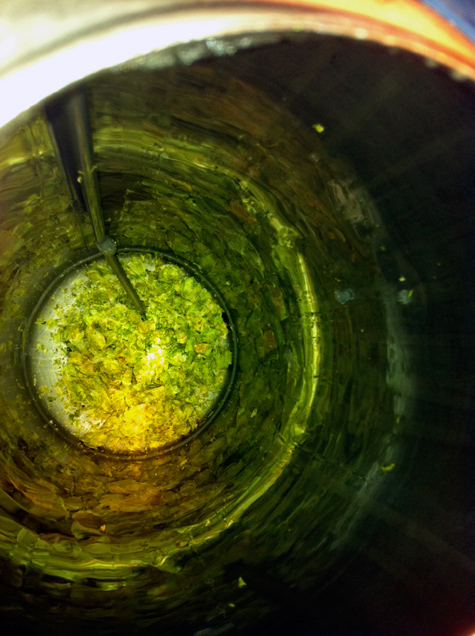 Loose hops in the Keg, Use a Bag or it will clog your line 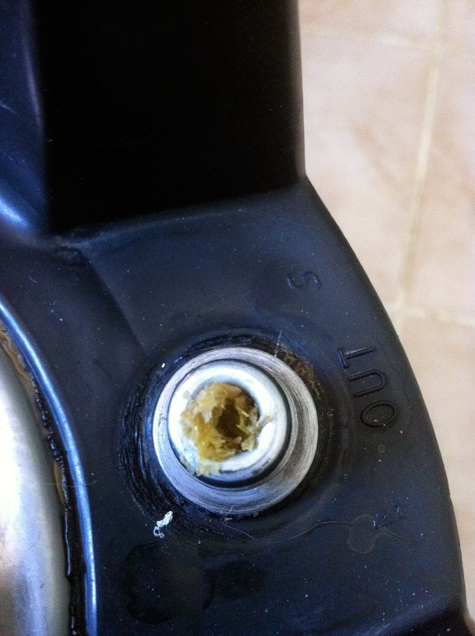 Often times I’ll do a second dry hop after 3 or 4 days with the first dry hop.  For this scenario, get your second Sanitized carboy, add the hops to another sanitized mesh bag, and place at the bottom of the 2nd Corney.  When putting the bag in, do your best not to get the bag under the dip tube or it will end up clogging the flow when you want to move it to the final keg. Now seal up the Corney.

At this point you have two options, you can keep manually releasing the pressure on the Corney or you can devise an airlock attachment like I use.(including the fancy red ribbon! ) The idea here is to purge the oxygen out of the receiving Corney. Here is how I do it, I attach my airlock (with Star San) to my gas line, “IN” on the Corney.  Attach my gas line to the “OUT” on the receiving corney. Gas on a liquid post doesn’t attach well on the post, but for a couple of seconds to get the air out it is fine.  I turn the gas one with about 1lb of pressure (or you’ll blow all the star san out of the airlock) I purge the tank for about 10 seconds.  Even if I don’t have all the oxygen out, there is a layer of co2 at the bottom which will be between my beer and the oxygen(air) and will be purged as the beer comes in. 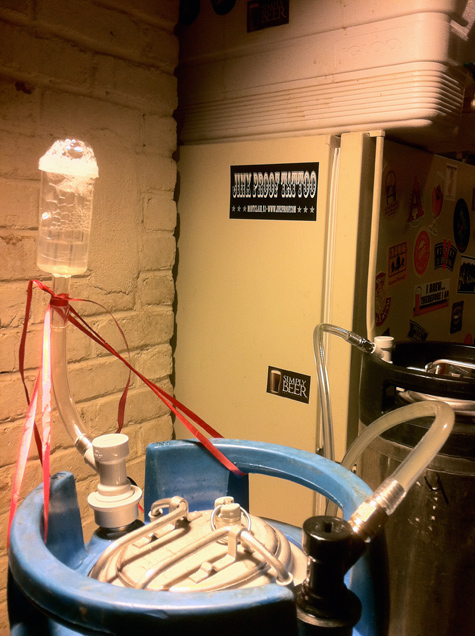 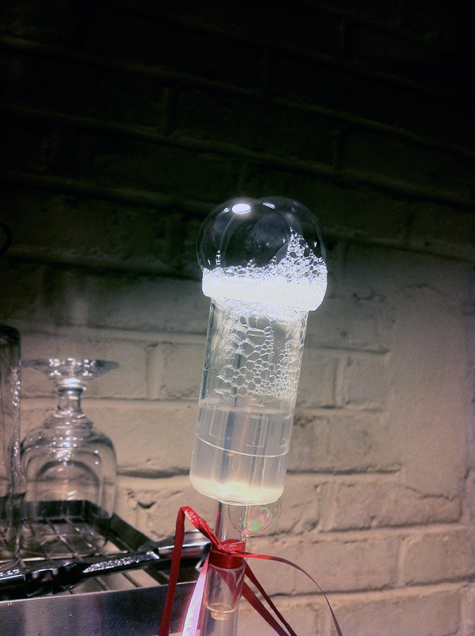 Air Lock on the Receiving Corney

Attach the 2 sanitized liquid connects to the sanitized 6′ liquid line. Take the gas line and attach it to the donor Corney.   Attache the liquid line to both Corney’s “OUT” posts.  You ‘ll be taking beer out throught the “OUT” on the first Corney and push it back in through the receiving Corney’s “OUT” post.  With the two Corney’s attached, turn the pressure on the gas up to 5lbs or so and watch the transfer begin.  If you have an airlock on, you’ll see the air or co2 come out of the airlock.  If you don’t have an airlock on the receiving Corney you will have to release a little pressure every minute or so.  Once the Donor Corney starts spitting foam, release the liquid line on the receiving Corney and take off the airlock.

the pressure Pushing the beer, only takes a couple pounds

The Whole System in Use

Next reattach the gas line to the receiving Corney and purge what ever space is left with co2.

The great thing about this method is there is minimal air contact with your beer, the one draw back is you tend to lose a bit more beer with each dryhop then you would in a carboy. However, I believe the former out weighs the latter.

How do you dry hop?  What do you think of this method?  Let us know your thoughts.