Ok, with a name like “The Beast” you have to try it, how could you not?  Avery brewing Co makes this 14.9% abv monster of a Belgian Strong Ale.  I had to try it, I love monster beers. 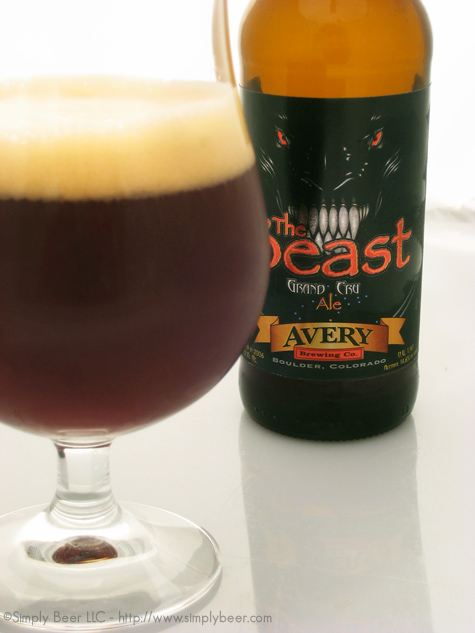 A chestnut brown ale, tons of carbonation supporting a thin dense head.  Lots of lacing with this beer.

I’m starting to get a sense of why this is called The Beast, strong malty nose consisting of Honey, pineapple, molasses, and black licorice. Oh yeah, almost forgot alcohol, very strong alcohol presence. The aroma on this beer is almost intimidating.

With that aroma, I’m expecting a huge beer, not just ABV, but big mouth feel and flavor.  This beer does not disappoint!  Big flavors, sweet raisins and dates right up front, melding into a black licorice, finishing with a malty chocolate taste.  But just when you thought it was done, the dates come back an linger on you palette.  Besides the fruit, the alcohol is very present in this beer, a constant heat, which was pretty heavy handed in this beer.

The name of this beer fits the beer, it’s a BEAST!  Complex and flavorful.  I thought the flavors blended together well.  A sipping beer at 14.9%abv, but after half a glass the beer became overwhelming and difficult to drink, extremely sweet.