I don’t know Mikkeller does it, but every beer that I’ve had from this “nomadic” brewer has been world class.  When I saw this on the Shelf at the Liquor Outlet in Boonton NJ, I had to get it – it was a cranberry lambic and from Mikkeller.  I didn’t see how I could go wrong. 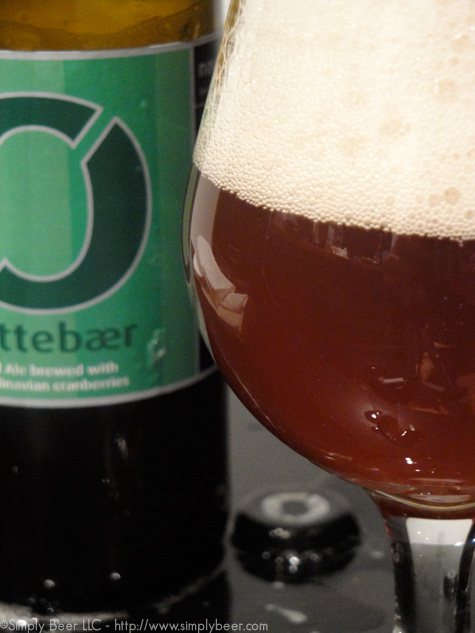 Here is how Nøgne-Ø describes the beer:

A collaboration between Mikkeller and Nøgne E. A tyttebærøl brewed with Brettanomyces, and bacteria. The beer took 9 months to ferment, and needed a further 8 months of maturation in bottle before it was released for sale. This ale is very dry and acidic. The 1000 kg of hand-pressed cranberries, have a distinct feel. 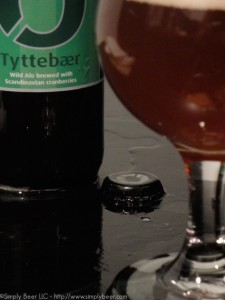 I could barely get the cap off before this beer came gushing out the top.  The foam was pretty fierce almost pushing the cap off.  After it calmed down, it poured a cloudy amber red brown with light tan head with slight red tones to it.  I would assume the red is probably the Tyttebaers (mountain cranberries) in the beer.  The head dissipates a few minutes after the pour, but a couple swirls around the glass will instantly build up a significant head.

There is no doubt there is wild yeast in this beer, it has the super funky barnyard lambic aroma. It’s also a little bit fruity with some citrus under tones. Personally, I loved the acidic funky aroma of this beer. 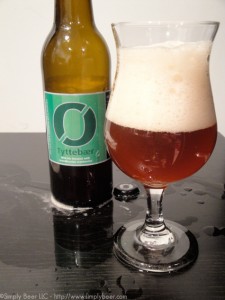 Highly carbonated, good bit of sour, make this one not for the faint of heart.  Surprisingly, the cranberry actually comes through the sour funk in this beer.  Beer finishes very dry as you would expect with a wild yeast beer.  The sour in this beer really hits the tip and sides of your tongue.  Slowly, as you drink this bottle, the sour starts to build up on your teeth giving you that second round of sourness as you lick the front of your teeth.  In my book that is a good sign of a sour beer.

Calories:Very dry 8% abv, so not a lot of residual sugar left in the beer, would estimate 220-240 calories per 12/oz (Calorie Chart)
Overall Impression:

Aside from losing a bunch up from the carbonation, the beer has a great aroma and good sour.  A delicious beer.  About 6-7 on a 10 point scale.  Would be interesting to see how this beer ages over time.  A great Mikkeller and Nøgne-Ø Beer.