This is a beer I’ve been looking for a long time and when I was offered it during a beer trade, I jumped on it.  Each Year Flying Dog puts out a new beer in their Wild Dog Series, several years ago they barrel aged some of their Horn Dog English style Barleywine in Oak Whiskey Barrels.  You may be asking why am I reviewing this beer instead of saving/cellaring it further.  I asked Matt Brophey, Head Brewer of Flying Dog, should I drink it now or cellar, he eluded to drinking it now since it was already several years old.  He also said it had a lot of vanilla when it was originally packaged, so that is something I’ll be looking for.

A pretty dark beer with some mahogany highlights, I thought it would be a bit lighter.  It poured with a small head and that quickly dissipated leaving a small collar of a sandy colored foam. 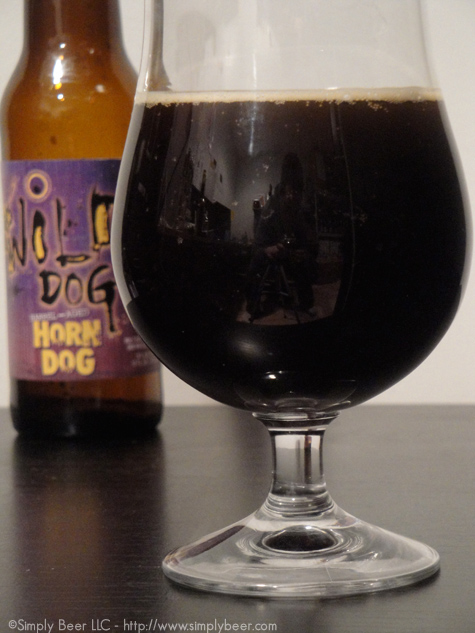 This beer had a big boozy nose, lots of sweet raisin, whiskey, and vanilla.  Unfortunately there was a hint of cardboard coming through.  Overall the aroma was lovely, but that bit of cardboard is a tell tail sign of oxidation.  Not the breweries fault, but a capped beer to last over 3 years is pretty tough even under the best conditions.  But, like I said the aroma was really nice.  I spent several minutes just smelling the beer and loving it. 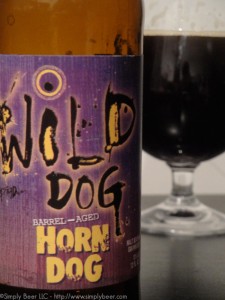 A big concern going into tasting a beer that is a couple years old is the oxidation and how well it was stored.  Since I only received the beer in the mail a couple days ago, I was not sure what to expect – I was basically on pins and needles.

WOW! So smooth, like butter! It is oxidized for sure, but quite frankly it is a very solid beer.  The vanilla and whiskey have held up very well and the malty sweetness of the barleywine has blended well.  Up front there is a significant malty chocolate caramel sweetness which quickly melds into the vanilla and whiskey treat.  But the whiskey and vanilla flavors are so integrated into the feel of the beer they don’t disrupt the flavor of the beer.  The beer is so incredibly smooth and blend that even the 10% abv on the finish is a nice marriage into the beer.   There is a slight sherry flavor in the finish of beer, most likely caused by oxidation, but it compliments the vanilla whiskey flavors nicely.

I wish I could have drunk this beer a couple years ago to compare.  But even though this beer was 3 years and a bit oxidized, I really enjoyed the flavors and how smooth this beer was.  I’m interested to hear what others thought of this beer.