The hoppiest beer in Belgium, hummm… well I need to see for myself.   XX Bitter Belgium Golden Ale says right on the bottle, “the Hoppiest Beer in Belgium”.  I don’t know how many IBU’s this beer, but it has a best before day which is 2014. 2014, an IPA with a best by date 4 years away??? There must be something else going on with this beer.  After a looking at the Shelton Brothers (importer’s) website, it turns out this hopped up Belgian IPA also makes use of a bit of brettanomyces.  Hoppy and Bretty, must try!

Here is how De Ranke describes their beer:

XX Bitter is a very weighty beer, aggressively brewed to be the hoppiest in Belgium. Some more delicate palates are put off right away. Those warriors who accept the challenge, and take time to sort through the barrage of sensory impressions, usually end up loving it. It is first of all remarkably hoppy – and it persists in its hoppiness unto the bitter end – but it does not want for balancing maltiness. In the middle is a “barnyard” Brettanomyces yeast character that is very reminiscent of Orval in its heyday.

You might say this beer is Orval with everything turned up to 11, which is exactly what the brewers were seeking. 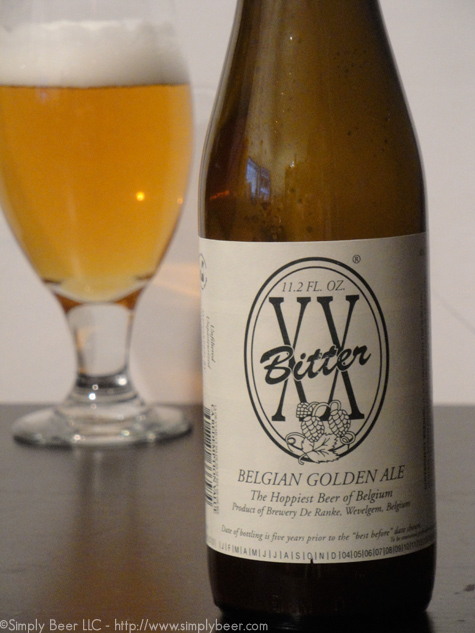 It was a very clear beer until I poured the last of the beer into the glass, then it became super hazy and a bit lighter.  A very intriguing pale amber color, had a nice big creamy, rocky head.  As the foam dissipated, it left a good bit of lacing.

Wow, I gotta say if this beer tastes as good as the aroma, I’m going to be a huge fan! Tons of hop and funk on the nose, a bit of vinegar and pine resin. 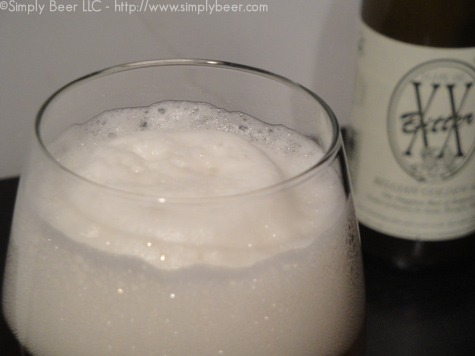 I thought this beer would be a bit more sour because of the aroma, but right off the bat it was an unbalanced very hoppy beer.  To much on the hop side on the first sip, probably a bit to cold. Cold will tend to mask the malt profile of the beer allowing the bitterness to come through a bit more.  Very thin mouth-feel with not much flavor up front.  But when all hop was lost, it moves to a really nice funky tart flavor with lemon fruitiness and some medicinal phenols from the yeast.  That really nice funkiness was then blasted by an intense dry resiny hoppy bitterness.  As this beer warmed the bitterness subsided a bit, and the funkiness and flavor characteristics of the hops came out a bit more, balancing the beer slightly more.

Calories: 6%abv dry beer with the Calorie Chart an estimated 175-190 calories per 12oz

I thought this beer was over hopped and unbalanced.  The Brettanomyces yeast was the saving grace for this beer, it added a nice dimension to the middle of the beer.  I would recommend drinking this beer a bit on the warm side so the funkiness of the beer comes through more and the bitterness get cuts back a bit.  You many also want to sit on this beer for a year.