My buddy Scott in Colorado sent me this beer a couple months back when it first came out (and a glass to drink it in).  I stashed it way with my ever increasing collection of beer and soon forgot about it.  That was until I got an email from Scott the other day about some podcast ideas and suddenly I had a hankering for an espresso (coffee) stout.  So here we are, I’m about to pull this out and I don’t know much about the beer aside from its got coffee in it and it is base beer is the wonderfully delicious Yeti Imperial Stout.  I reviewed it about a year ago and it was already packed fully of chocolate and coffee aromas and flavors.  In Great Divides’ infinite wisdom (seriously) they made an oaked version of Yeti.  Yeti aged with oak chips, which was even better then the Yeti with an additional layer of complexity of vanilla and oak.  Now they have taken the Oaked Yeti and added espresso to it.  They scored with the first ramp up of the Yeti to oaked Yeti, lets see how the Espresso infused oak aged Yeti is.

Here is how Great Divide describes this beer:

‘This’ is a new addition to the Yeti clan. A generous infusion of espresso adds yet another layer of complexity to this beer, combining with the vanilla oak character, intense roasty maltiness and bold hop profile to create a whole new breed of mythical creature. It’s official: You can now have Yeti with breakfast. 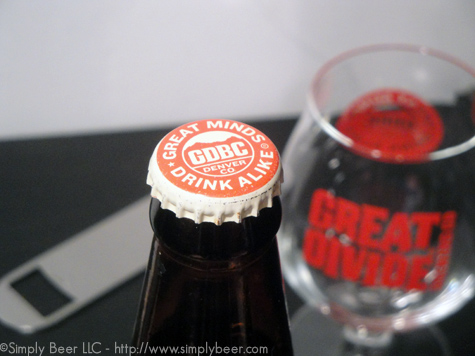 Dark, dark, dead of night no moon dark. Fitting that it has an espresso colored head to it.  Head came out nice and thick and subsided back into the beer after a minute or so leaving a bit of lacing on the glass.

Wow, wake me up breakfast stout.  I wish my coffee smelled this good… umm, yeah… Tons of espresso on the nose, but if you just stop there you are missing so much more to this beer.  There were 75 IBU’s in the base beer.  And guess what, they are still there.  There is wonderful little candy orange note that sits under the coffee.  Not much oak on the nose bit there is a faint hint of it. 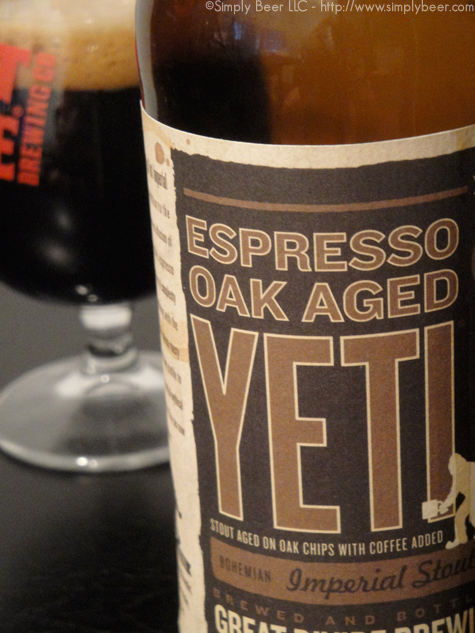 As I just tweeted, this is a beat you into loving submission kind of beer.  Tons of espresso right up front, but it isn’t acidic, it is creamy and smooth with chocolate and vanilla matched up with a good lengthy bitterness.  Coffee intensity squared.  I haven’t had a coffee stout like this since the Brooklyn Intensified Coffee Stout.  There is a decent citrus quality that lurks in the middle mouth with this beer, giving it depth and even more character.

This is what a coffee stout should be, and yes, I interchange coffee and espresso.  I could see aging this beer for another year, but it is fantastic now.