I received this beer a couple days ago in a beer trade with a fella from Florida.  To me, this sounded like an intriguing beer, a farmhouse ale with a secondary fermentation on guava fruit. Especially since I’m a huge fan of saison/farmhouse style ales; in fact it may be one of my favorite styles, especially on hot nights like tonight. 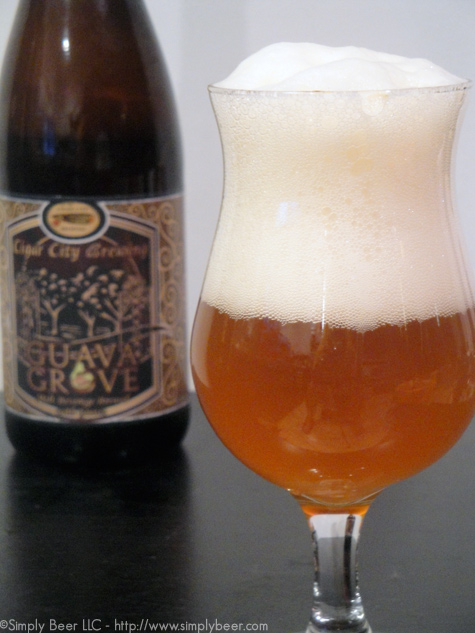 Here is how Cigar City describes this beer:

Guava Grove Ale is a Belgian ale that sees a secondary fermentation with and extended aging on Guava puree. The complex flavors imparted by both the Belgian yeast strain and the Guava are unlike anything you are likely to have encountered. This is an elegant beer that pairs well with white fish, mussels, fresh tropical fruits and earthy cheeses. It also makes a fine accompaniment to Guavaween festivities.

Wow, holy carbonated monster. The beer started spewing foam the instant I cracked it open.  The beer poured a hazy orange with a giganto full thick head and lots of tiny bubbles whirling their way up the center of the glass.

The aroma really tickles your nose with tons of carbonation and a sharp fruity nose, almost smells like it could have a slightly sour note to it. A guy can hope, right?  What I love is the quava really stands out in this beer.  Not subtle like some fruit beers, but it your face, “Hello I’m guava and I’m gonna rock your world!” 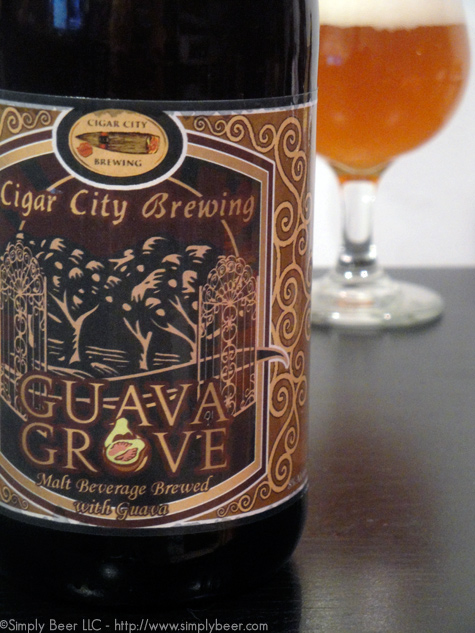 Super carbonated with a big fruity flavor that finishes über dry and fairly tart. There was a touch of bitterness on the back-end, but the guava lingers on your tongue with the tart which makes it super refreshing.  I kept wanting to find more flavors with the intensiveness of the guava and tartness, but i couldn’t get past the fruit, but you know what, that wasn’t a bad thing.

I’m really impressed with this beer.  The tart fruiy mango flavors work really well with the base saison.  At 8% abv, I couldn’t even find a hint of it in this beer.  As my second Cigar City Beer, I’m a fan with this one!